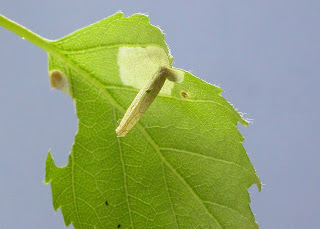 A Coleophora serratella  larva that I found on Baildon Bank two weeks ago has now constructed its second and final case.
On the left-hand side (of the top picture) there is an obvious indentation in the leaf where a mine was excavated and then cut out before being lined with silk to create the typical cigar-shaped case. 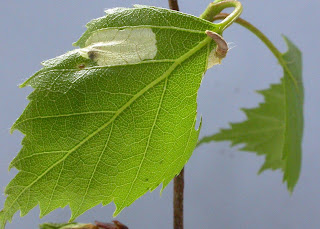 The abandoned, dorsally-arched, first case was left abandoned affixed to the margin of the original mine and can be seen on the lower picture which shows the upper side of the leaf.
Over the next couple of months I will be collecting more cases to study the parasitoids which attack them.
﻿
Posted by rusticus at Sunday, May 19, 2013 1 comment: 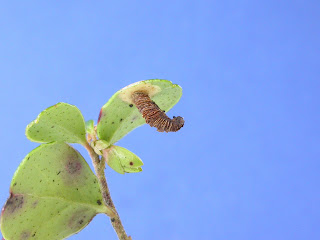 Records suggest that only once in fifty years is someone mad enough to hike up to the cowberry and scrabble about (on hands and knees) to find this distinctive micromoth larva. On Tuesday 23rd April 2013 I was that man, getting surprisingly sunburnt in what seemed like a howling gale on Barden Moor, VC64.
Posted by rusticus at Thursday, April 25, 2013 1 comment:

I have been rearing some Coleophora glaucicolella from the Compact Rush (Juncus conglomeratus) at Ben Rhydding Gravel Pits. The first imago to emerge is that of a parasitoid; the chalcid 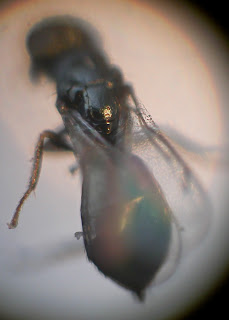 As described by Dick Askew (Handbooks for the Identification of British Insects, 1968), the scutellum is entirely reticulately sculptured and the gaster of this female is approximately 1.5 times as long as broad. 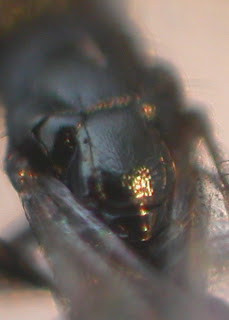 The notaulices converge and intercept the axillae only slightly outside their inner angles.
Posted by rusticus at Sunday, March 24, 2013 No comments: 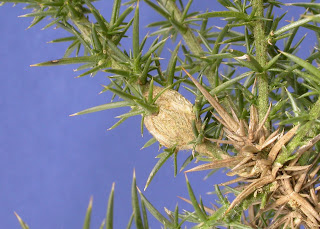 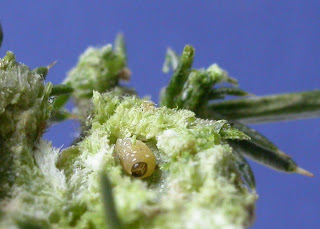 On the 1st February 2013 I was searching the Gorse (Ulex euripaeus) on Baildon Moor for moth larvae. I was particularly looking for the caterpillars of the Scotopteryx geometrids as a very rarely collected parasitoid (Aleiodes) uses July Belle (S. luridata) as a host. It is quite likely that Lead Belle (S. mucronata) is an alternative host and Baildon Moor is where the only known Yorkshire specimen of this moth was captured in 1897.


I noticed that one of the gorse stems was swollen and, suspecting this to be a gall, I cut the stem in two to reveal an insect larva. I took photographs of the gall and larva and posted these onto the British Galls Yahoogroup website which is an internet forum run by the British Plant Gall Society. Within an hour, a reply was posted suggesting that the galls were likely to be caused by the coleopterous species Stenopterapion scutellare (Kirby, 1811).

I have now sent the record to the BPGS and to the Plant Galls Recorder for the Yorkshire Naturalists’ Union). It seems to be a first record for VC64.

There are still a few galls visible on the gorse bush and I hope to harvest these later in the year in order to see the adult beetle.

Posted by rusticus at Friday, February 15, 2013 No comments: 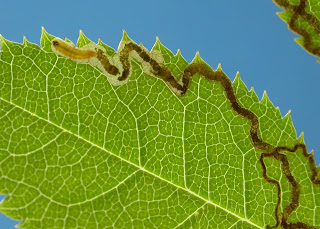 I have a single Dog-rose (Rosa canina) in the garden which I only planted earlier this year.
I was pleasantly surprised last weekend when I found twenty-eight tenanted mines of Stigmella anomalella.
Posted by rusticus at Friday, October 12, 2012 No comments: Last November I found several larvae feeding under the loose bark of an Italian Maple in my garden. I havo only recently realised that these are Pammene regiana after seeing a photograph in the newly published Micro-moths field guide. 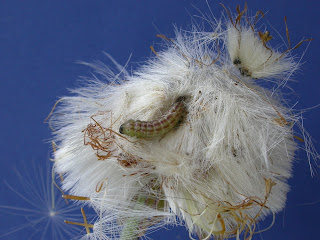 Having located a large stand of Coltsfoot (Tussilago farfara) earlier in the year, I went back this weekend lo look for the early stages of the Triangle Plume moth. The larvae feed within the seedhead of Coltsfoot at this time of year and I managed to find one larva and three pupae.
As I was hoping to find evidence of parasitism by the braconid Microgaster alebion I will have to go back and look for some more larvae, the parasitoid would not have allowed its host to reach the pupal stage. 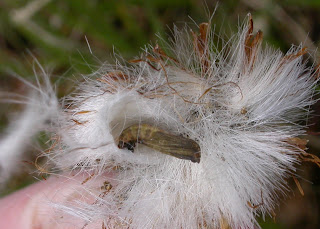